As I mentioned before, I'm participating in Camp NaNoWriMo this month. Not going for the ultimate prize at 50K words, just trying to replace the words I lost when I cut the last several chapters of Hidden Souls in the editing process in May. So, I have a measly goal of 15K words.

So far, I'm almost up to 4K. Keeping mostly on track, falling behind every now and then, but not too bad. Word sprints are about the only thing keeping me up with my word counts, so I guess I can thank Twitter for something :)

Anyway, since I've written some more, I figured it's only fair to give you another teaser.

Brushing off her hands and knees, she moved to the door and wiggled the handle. Unsurprisingly, it was locked. Shaking her head, she pulled the screwdriver out of her sock gingerly pressed her ear to the door, and only heard the soft breathing and grunting of the guard who had been sitting there before. Her hand shaking, she slowly worked the screwdriver into the small hole on the lever knob, pulling the knob casing off the door. Smiling, she worked the screwdriver into the gap between the door and the trim of the handle, sliding it off and revealing the screws underneath.

My, my, what is 'she' up to? I admit, Sophia surprised me with this skill. I'm gonna have to go back and investigate just how she figured out how to remove a door handle where there are no visible screws. I also might end up trashing this scene, at least in part, because I'm not sure how it would make logistical sense--if she's really locked in the room, 1) is she going to be able to remove the door handle, especially with a guard just on the other side of the door, and 2) would that really help her?

Food for thought.
Posted by Chelle at 12:00 PM No comments:

I was browsing the NaNo forums in preparation of starting to write tomorrow, and ran across a thread talking about which pop culture references you are and are not allowed to use in your novel (song lyrics are a no-no, just about everything else is fair game as long as you don't go into libel territory). One person commented about how (s)he does not use pop culture references in writing, because if the novel survives for 50 years, the novel might seem dated with those references.

So I thought about it. And my conclusion is that you can't avoid dating your novel. The Tomb, by F Paul Wilson, was written in 1984. It's sequel, Legacies, was published in 1998. There were so many references to technology that was commonplace in 1984 but wasn't around in 1998 (payphones, walkmans, etc), and visa versa, that Wilson opted to rerelease The Tomb after making heavy setting edits. These things weren't the focus of the book by any means--just helped get the reader into the setting, but dated the book.

Classics do it too. They are set in a specific time period, which is clear by the setting. It's part of the novel. Would Romeo and Juliet, complete with the language that they use to speak, make sense translated to modern times? Of course not. But the story remains true. Which is why it has been adapted and modernized, why West Side Story exists. Tangled tells the classic story of Rapunzel, a story that was written in the 16th century (and probably originated long before that). But it was modernized and made more acceptable for modern audiences, even if the setting (a kingdom without technology) wasn't changed much. At the time it was written down, it was something that might've actually happened down the block.

So to say that you aren't going to incorporate your culture of the time into your novel, which is set in modern day American (or wherever) is silly. The choices your characters make, the very people they are, depend on their surroundings. You cannot be a teenager or young adult in today's society and not be touched by computers, or celebrities, or what have you. You cannot ignore the tension between the religious right and the liberal left, or the constant debates over gay marriage and abortion that seem to plague the media. They don't have to be the foundation of your character's actions, but his or her upbringing will affect how they look at those of different race, gender, and sexuality. Or how he or she might react if the nation was attacked by Japan. Or how he or she talks and communicates with others (texting vs phones vs computers, etc).

If you write a good story, there's no reason not to believe that in 50 years, it still won't touch people's hearts. So avoiding references to the year that your novel is written is silly. Instead, focus on making sure that your story can touch people who may not understand the culture you describe.
Posted by Chelle at 7:39 PM No comments:

New Book and a Giveaway!

No, no, not mine. I'm here today to promote The Rose Master, by Valentine Cano. I know, I'm slacking with my own writing. This is what happens when you move and start a job and have to live without internet for a week, but can't seem to find the time to sit down and write during that time. I'm working on it, promise.

But back to The Rose Master! This fabulous book hits stores today, so while you're waiting for something from me, go and check it out! And scroll down to enter for a chance to win lots of prizes! 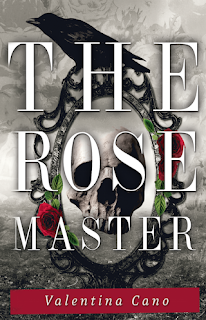 The day Anne Tinning turns seventeen, birds fall from the sky. But that's hardly the most upsetting news. She's being dismissed from the home she's served at since she was a child, and shipped off to become the newly hired parlor maid for a place she's never heard of. And when she sees the run-down, isolated house, she instantly knows why:

There's something wrong with Rosewood Manor.

Staffed with only three other servants, all gripped by icy silence and inexplicable bruises, and inhabited by a young master who is as cold as the place itself, the house is shrouded in neglect and thick with fear. Her questions are met with hushed whispers, and she soon finds herself alone in the empty halls, left to tidy and clean rooms no one visits.

As the feeling of being watched grows, she begins to realize there is something else in the house with them--some creature that stalks the frozen halls and claws at her door. A creature that seems intent on harming her.

When a fire leaves Anne trapped in the manor with its Master, she finally demands to know why. But as she forces the truth about what haunts the grounds from Lord Grey, she learns secrets she isn't prepared for. The creature is very real, and she's the only one who can help him stop it.

Now, Anne must either risk her life for the young man she's grown to admire, or abandon her post while she still can.
REUTS - Goodreads

Valentina Cano is a student of classical singing who spends whatever free time she has either reading or writing. She also watches over a veritable army of pets, including her five, very spoiled, snakes. Her works have appeared in numerous publications and her poetry has been nominated for the Pushcart Prize and Best of the Web. She lives in Miami, Florida.
Website – Twitter – Facebook - Goodreads

And don't forget to check out her blog to see where she's hopping around on the blog tour, starting today!

Now, enter for a chance to win some awesome prizes!
a Rafflecopter giveaway

Posted by Chelle at 8:00 AM No comments:

Email ThisBlogThis!Share to TwitterShare to FacebookShare to Pinterest
Labels: Promotion

Well, I think I got the climax of Hidden Souls re-written. I think. This is my third or fourth time working on it, so we'll see if it stands the test of time. Now I just have to link up to where I edited the rough draft with the climax and I'll be all set. My manuscript, including the bad ending, was sitting at 52K words, which makes me think that I should probably add in a subplot or two. But we'll see how it looks when I've tidied up the ending and added in some descriptions in other places.

Still debating whether or not to pursue publication, so I guess that would make a difference one way or the other.

I also found a place for Zach. I definitely think he'll be making a reappearance in Reclaimed Souls, but I tweaked him a bit and added him back in to Hidden Souls. So I can still have fun with him!

I got my schedule for the next year (July-June), and it turns out I have an easy July, and a moderately easy August, so maybe I'll join in Camp NaNo this year. At least for the word sprints and motivation to help me get parts of this book written. Or maybe to write Reclaimed Souls (possibly from scratch. We'll see).

As a thanks for sticking with me, I give you a very short teaser from the ending to Hidden Souls.

Sophia took a few slow, deep breaths and slowly pushed herself into a seated position. The ropes no longer bound her to the ground and she shakily rose to her feet, struggling to see anything in the room around her. "Hello?" She called out, tentatively moving her foot forward.

Sadly, any more than that and I'd give away some major plot points. Maybe next week, I'll give you another outtake. Or some background. Or something. I should probably get back to writing before I promise anything else :)
Posted by Chelle at 7:49 PM No comments: